Before I started Scale Model Soup I did a bit of research about what it takes to write a popular blog. One bit of advice I found was to be controversial. No one wants to read boring articles that don't take a strong stance on a subject. So I thought to myself, okay, maybe I can occasionally do that with SMS. Mind you, I'm not a confrontational guy and generally avoid conflict, but part of the appeal of writing a blog is the chance to raise my voice above those on the forums and discussion groups.

Well, it's taken a year, but my post to one of the forums promoting my latest article on "that guy" struck a chord in the moderator of one popular forum and was deleted. He found it to be "demeaning, insulting and a mean-spirited stereotyping of modellers." 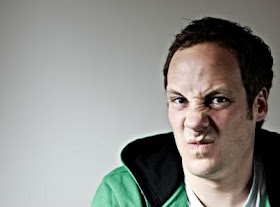 I'm open-minded, so I see his point of view. But I think 99 percent of my readers find the humor in my writing, and I almost always get a few chuckles from those of you who respond on the forums or post comments here.

As I explained to this moderator, it's never been my intention to offend. My goal with Scale Model Soup is simple...to promote the hobby and to provide light-hearted commentary on the scale modeling lifestyle. Let's be honest. We're an odd bunch of characters, myself included. I allude to stereotypes because they're funny and (in my opinion) far from demeaning or mean-spirited. I'll even be the first to laugh at myself because the gods know there's plenty to laugh at when I examine my life.

Yes, I called out people with body odor, and if that had any scent of mean-spiritedness, I willingly accept the charge. I find it rude of anyone to attend a public event without having properly bathed. I don't think that's controversial.

For the record, I'm not bitter. This gentleman has the right to run his forum the way he sees fit, and I respect that. It's a great site, one of the best on the interwebz. I will continue to post to his forum, but I've agreed to be more discerning in the topics I select.

My sincere thanks to those of you who laugh with me. And to those who laugh at me.